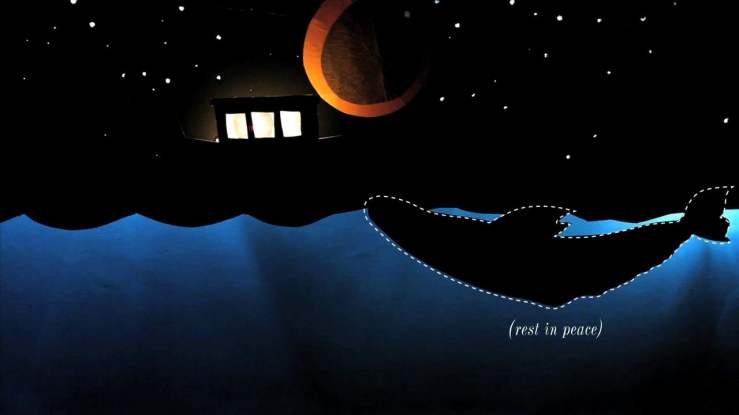 A whale fall the carcass of a whale as it sits at the bottom of the ocean. A dead whale is a boon for local wildlife, and they swarm it in stages, sometimes reducing it to the bones in a matter of months, although the body can continue to be influential for decades. I first started thinking about whale falls thanks to a museum exhibit at the London Museum of Natural History in 2010. I keep returning to how they are these active, semi-structured, but in some ways highly transient ecosystems. Unlike beached whales which can happen in populated areas, whale falls were long unknown to humans, since they often happen deep underwater, along the ocean floor.

More recently, whale falls have got me thinking about the produced nature of remoteness. By “produced” I mean the labor it takes to make certain things become naturally distant or remote. I see this as something distinct from the literature on “social distance” precisely because I want to focus on the work of making things remote that otherwise wouldn’t necessarily be so. A whale fall is an excellent example of a phenomenon that seems self-evidently removed from human activity, since humans, and even relatively few animals, can survive even for seconds at the kinds of depths where they are generally found, given the forceful pressures and near total lack of light. So even getting to one is exceptionally difficult.

But can difficulty of encouter alone make something remote, or is remoteness possible without physical distance? After all, people have spent centuries doing arduous tasks, and often of the most nefarious kind, moving literal mountains if they thought there was profit in it. Imagine if things had gone otherwise, if the kind of effort and attention had gone into visiting the deep ocean that instead has been ground into successive waves of colonialism, slavery, and genocide. In a different world, where efforts had been directed otherwise, going to visit a whale fall was a routine school outing, but the idea of sweat shop labor, for example, might seem laughable because the social and technical difficulties would be insurmountable. The prospect of getting so many to work for so little, would simply be too remote.

Even things that are not physically distant can be made remote. In her book In the Wake, Christina Sharpe has written about whale falls in relation to the legacies of the Atlantic slave trade. Given how carcasses are recycled through the ocean after being eaten by a variety of scavengers, Sharpe highlights the enduring presence of the molecules of bodies in the ocean, the “residence time” being the scientific term for the length of time it takes for molecules to cycle out of the ocean. So too, Sharpe argues, are Black people today living in the residence time of the bodies of the myriad of Black people who were forcibly enslaved and sent on the genocidal middle passage journeys, their bodies thrown into the Atlantic, sometimes while they were still living. Reading Sharpe’s work got me thinking about how those molecules would likely be present in the bodies of anyone who is physically connected to the ocean—say, by eating fish from the ocean or animals that ate those fish, or drinking water that came from rain that originally evaporated from the ocean surface.

These body molecules, and their associated legacy of trauma, cycle through our bodies, but as Sharpe shows the consequences are very different for people in the Black diaspora, for they are immediately affected by living in this currently horrendous world, where the routinized, early death of Black people is seen as commonplace and even natural. And furthermore, in such a world it is seen as natural for white people, despite being infused indiscriminately with the same molecular legacies, to be completely ignorant of the oppression of Black people. I am consistently surprised by how shocked some people are when they first realize that even beginning to understand oppression can take a lifetime–and that the necessary approaches to undo the oppression of oneself and others are still emerging, despite having long histories of their own. But their shock stems in part from how white people have produced the suffering of Black people as something that’s remote as a whale fall, even when its physical consequences are literally within our bodies, and right in front of our face.