This post is part of my Influences series, which is explained here.

“You tell me not to worry
About the simple fact I’m dead.
It’ll go away by morning.”

–Sleater-Kinney, “What if I Was Right?”

This is a post about the concept of recognition, which is the subject of debate in political theory. (See the summaries in these two different reviews of Patchen Markell’s book on the subject.) Recognition usually is conceived of in terms of social groups in society, and in relation to political representation, asking questions like: “Should groups work to be recognized by the state, for example as official minorities?” That kind of state recognition can grant certain benefits and protections, but it also means conforming to the (potentially problematic) laws and definitions of the state itself. These are important questions, but here I want to take slightly different task and instead focus on individual recognition, for example of thoughts and feelings and forms of identity, with respect to questions like, “How do you know who you are? How do you know what you feel?”

With that in mind, the opening to the song above, “What if I was right?” can be read as an indictment of gaslighting, which involves manipulating someone so that they begin to question their own judgment. In the song, someone tells the speaker “not to worry” about a “simple fact,” but it’s an especially demanding request, because that “simple fact” is that she’s dead, as if it’s a temporary hiccup, a minor condition.

The song dramatizes the feeling of impossibility that gaslighting involves, a theme that’s found in many Sleater-Kinney songs, like the second US-Iraq war protest song “One Beat,” where they suggest that scientists need to “invent a world for me,” (see also Afropunk, Poly Styrene, and Le Tigre). On the one hand, it may be impossible for the singer to be speaking given that she’s no longer living. On the other hand the speaker is making herfeel impossible by manipulating her into questioning her recognition of both the facts of the world and of herself. She both can’t be dead, according to the “you” in the song, and based on how she herself feels, she is already dead.

The song has an added dimension because the “you” doing the gaslighting is at the same time an individual, probably a romantic partner, and society more generally. So the song speaks at once to the power relations of her particular relationship and towards the ways women and gender non-conforming people are trained to questioning our own judgment on a more systemic, societal scale. 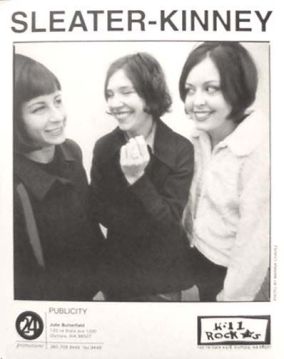 For this reason, the song can be read as making, in a few lines, a succinct form of the argument made famous by Betty Friedan in The Feminine Mystique–a classic catalyst of 1960s white US second wave feminism. Friedan argued that post-war US femininity was a trap whereby women were gaslighted (my terms) into believing that real (feminine) women didn’t actually want “masculine” things like an education or a job outside the home. Friedan took down the old argument that many heard on a regular basis at the time: “You don’t really want an education and a job. That would be unladylike and you’re a real lady, aren’t you?”

Such conceptions of gender normalize the idea that that masculinity and femininity are mutually exclusive: if you are one, then you can’t be the other, and vice versa. Then, by definining certain things as masculine, and therefore out of bounds to feminine women by definition, people could systematically encourage feminine women to disbelieve any feelings they had about wanting such  traditionally “masculine” things.en were gaslighted (my terms) into believing that real (feminine) women didn’t actually want “masculine” things like an education or a job outside the home. Friedan took down the old argument that many heard on a regular basis at the time: “You don’t really want an education and a job, do you? You’re so feminine.”

Although it’s more commonly used in an psychology, I find the term gaslighting helpful for social theorists because it concretizes some of the ways that people can begin to question facts that otherwise might be considered obvious. But there’s also an added dimension that gaslighting doesn’t quite cover. And that’s the idea that people always know what the facts are, what they want, who they are, and the gaslighting is the crime of denying what otherwise would obviously be true.

But I’d like to argue that there’s a second, more pernicious side to systemic gaslighting: it shapes what people know and can know about ourselves. It affects what we can feel (what Foucault talks about as the “conditions of possibility,” in this case for knowledge about oneself), and who we become. Gaslighting can become the reality. To continue with the above example about femininity: If everyone ‘obviously’ recognizes that having a job outside the home is masculine, then feminine people may not recognize any wish they have to hold a job as being a geniuing feeling worthy of sharing with others. Because you simply couldn’t be a feminine person who wanted to hold a job. By wanting to hold a job, by definition you’d become unfeminine and, if in this case you consider yourself feminine, then whatever you’re feeling must not be the feeling of wanting a job. So that must not be a real feeling. Instead it’s just a momentary lapse, something that doesn’t really exist.

That brings us back to recognition, because the second reading of gaslighting suggests that something more is at stake than simply recognizing an existing feeling, individual, identity or social group. (To be fair, the literature on recognition is more complex than this–see the links at the beginning of this post. I’m oversimplifying here to make a point.) Instead, part of recognition are a host of other prerequisites: determining whether something is there or not, whether it exists or not (elsewhere, I’ve called this specific aspect instantiation), whether you as a subject are allowed to feel anything to begin with,  whether it’s possible for you to feel it, and whether others would acknowledge that possibility or not.

This discussion may seem rather abstract, but it’s crucial to things like definint what sexual harassment is–which involves recognizing that it’s ok to feel terrible sometimes–din the context of the #metoo movement, and to the systemic disregard of women’s bodies and feelings in health care. (Here’s one popular, in the sense of widely read and not narrowly academic, book on sexism in health care that, full disclosure, I haven’t read.) It also is relevant to victims of domestic violence who say some version of the phrase, “Oh, it’s nothing,” when someone notices your wounds. It’s also something I think about when articles claim that COVID-19 affects men worse than women. How will practitioners know how COVID-19 affects feminine, female, gender nonconforming people, and BIPOC? Importantly, will our feelings and sensations be recognized and taken seriously if we ourselves can’t even know what they are?