Introduction to Reading With Posts

This is the first of a new type of post that will consist of close readings of short excerpts of texts, for students and anyone who’s interested. The idea is to include short excerpts from sources I’m currently reading—primarily on race, class, gender, decolonialism, capitalism, logistics, infrastructure, cities, and disaster—to share the early stages of a project in the form of critical reading.

Many students come into my courses thinking they should read the assigned texts straight through, or that they have to say they like the texts simply because I’ve assigned them. Instead, like many professors and educators, I emphasize that reading is a dialogue between author and reader, so it’s crucial to think and take notes in detail about how a text is positioned and framed, where it comes from, who it erases, and what its arguments do. Each post will only consider a few pages from the text at hand, and usually a much longer set of notes to explain why and how I read it.

Overall I’m in favor of avoiding simply tearing down sources, instead trying to read them in an effort to get what you can out of them, to go along with their framework temporarily when it is useful to do so. After all, I choose to read things because I expect them to be insightful in at least one way, if not in others. However, it’s also important to directly address pervasive legacies of racism, Islamophobia, sexism, classism, and homophobia wherever they show up. So I’m more than happy if students respond affectively in many different ways, both positive and negative—as long as they are specific, tell me why, and think about how to alter a text so that it could be productive. That’s also what I’ll try to do here. 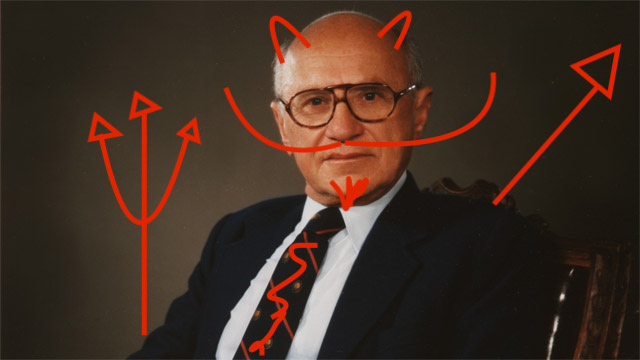 Many researchers have sources that they keep coming back to, but that they don’t like very much, or people who they cite who we might not want to cite, but who we end up using, even just as contrast for our own ideas. There is a whole politics to that, which I might discuss in a different post. But for now I’ll focus on one such book for me: Milton Friedman’s Capitalism and Freedom has been incredibly influential not only for neoliberal or neoclassical economists, but as a popular work on economics, notably an argument for unregulated trade and gutting the social policies of the state. I’m reading this both to understand the rhetorical strategies, but also how to rewrite it using a different social understanding and imagination—how the conclusions would differ if we use both different styles of reasoning and begin with a completely different premise, but nonetheless communicate it in an accessible way.

Given the harmful impact of this book on social policy over the years and its continued influence through austerity politices among others, I’ll state up front that this is not a charitable reading of Friedman—hence the title, just so the approach is clear. I’m more interested in using this as a foil to think differently, than in going along with the author, simply because we are asked relentlessly go along with, and submit to, coercive neoliberal framings in daily life. I’m also less worried about being over-critical because there is also a different power differential here given the dominance of the framings that are in part derived from Friedman’s work. And the more I read of his work, the more I’m convinced that much of it doesn’t hold up to scrutiny beyond the very limited perspective for which it was written (white, male, Westernized, wealthy individual), and that its pull comes at least partly because it tells powerful people what they want to hear. So this isn’t written for pro-Austerity, neoliberals, capitalists etc., who I doubt would bother to read a post by an upstart social theory professor like me anyway. Rather its for those interested in working through and thinking out alternative ways to live in and be accountable to the world.

Below I’ve included both quotations from just a few pages of the original text at left, and my comments at right. The quotations below are from Ch. 10 “The Distribution of Income”, pp. 161-176 in Friedman, Milton. 2002. Capitalism and Freedom: Fortieth Anniversary Edition. First edition edition. Chicago: University of Chicago Press. Link to full text.

So already in these few lines, the authors’taking the notion of difference in the labor market, portraying it as the outcome solely of “taste” or personal preference (i.e. for more or less work, for more or less distasteful jobs), then using that to claim that labor inequality is justified. He also implies that it’s not possible to selectively address job inequality, i.e. to argue for “intervention” in some cases but not others. So this makes it seem like those who are concerned about labor market discrimination would inherently wish to demolish any differences whatsoever in labor, and there’s no reason this should be the case. The possibility doesn’t even come up that someone might not have a choice which job to do, might choose what’s best not for oneself but for e.g. a family member, or might not be able to fulfill their own “tastes” if there is job scarcity, discrimination, etc. There is a chapter that gives an unsatisfying treatment of discrimination (which I’ll write more about if there’s time). But discrimination is absent here, and that’s remarkable given that ostensibly he’s talking about job distribution and inequality, and his arguments appeal to the reader’s experiences in the word, i.e. they’re not based on the hyper abstracted assumptions of many economic models.

In contrast, it’s entirely possible to make similar arguments but beginning with more useful assumptions: i.e. that discrimination is endemic, that people operate not just as individuals but in families, societies, and social groups, that their “tastes” arise from complex landscapes of opportunities, abilities, and contraints, and that job availability is crucial for shaping what kind of job people end up doing. People like Amartya Sen have come up with alternative models, though within a liberal framework of rights and freedom, so in a later reading post I’m hoping to turn to Sen, but to try to rethink his liberal approach.