An Israeli Professor’s Trip through the Jim Crow South

I’ve been thinking about the international circulation of racist expertise. James Q. Whitman has published a new book, Hitler’s American Model. It’s about how the Nazis of the 1930s and 1940s studied the racist legal system of the United States as part of their efforts to take away the rights of German Jews, which paved the way to the genocide of the Holocaust.* Reading about the book, I was reminded of the Israeli geographer David Amiran, another international expert who studied the US South, albeit during a ten-day trip to throughout the Jim Crow South of the 1950s. 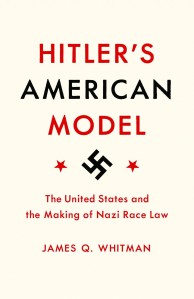 To be clear, I don’t know of any systematic effort on the part of Israeli government officials to use US laws as a model for the Israeli legal system. That doesn’t mean it didn’t happen, but I have done no research on the subject, and at the time of this writing don’t know of anyone who has. What I did come across in my research on maps in Palestine and Israel, was the concerted effort to use international population censuses, including the national censuses from the US, the UK, and the Netherlands in particular, as models for the Israeli population censuses of the 1960s and 1970s. Such later efforts would be aided by the international contacts of Israeli academics, contacts that were formed in no small part during conference trips like the one Amiran took.

It is not at all surprising that Israeli officials used other censuses as models for their own. When starting something new–or in the cases I saw, revising it significantly–it makes sense to look to existing examples. The selection of the countries used as models is certainly interesting, however. For it demonstrates, among other things, the close ties between Israel and countries in Europe and North America. Countries in those economically and politically doinant regions were seen as being technologically advanced in ways that obscured their legacies of political injustice, for example through colonialism and the racist legal systems that included Jim Crow.

So it was partly to strengthen their international networks that Israeli researchers, like many researchers who have the privilege to do so, traveled to academic conferences. And it was as a member of a formal excursion organized in relation to one conference, run by the International Geographical Union in Washington DC in 1952, that David Amiran went to the US South. At the time, David Amiran’s contacts with the US were already influential in helping to establish post-1948 Israeli academia. Amiran was a prominent Israeli geographer of Lithuanian background who was trained in his native Germany (Freiburg). He followed that training with work in Russia and a PhD in Switzerland. He was also one of three founders of the discipline of geography at Hebrew University after 1949, and in 1977 he went on to receive the Israel Prize, arguably the highest honor awarded by the state of Israel. So the notes that he took in his travel diary for the trip are part of a broader academic relationship between Israel an the US.

But before turning to Amiran’s notes, first a caveat about language. Language is important to understanding the kind of notes Amiran was making during his trip. His travel diaries for this trip in particular are in English. This is important because his notebooks are usually almost exclusively in Hebrew and, less commonly, German. From what I can tell, his use of English on this trip indicates both that he was speaking more English while in the US, and also that he was in large part writing down almost verbatim what the tour guides (two professors from the University of Georgia) told the group, and adding very little commentary of his own. So the text of the diaries doesn’t necessarily represent Amiran’s own words, but in the diaries he doesn’t contradict the guides’ statements either.

During the trip, Amiran was absorbing dominant white narratives about US slavery and the Jim Crow South. The arguments he presents in the diary will be familiar to anyone who’s come across contemporary white supremacist arguments about US slavery. Namely, and apparently parroting his tour guides, he denies the overwhelming horrors of past slavery and present systemic inequalities under Jim Crow. In his diary, Amiran writes that the average Black agricultural worker in the South earns “the same wages as a white one.” He also refers to Uncle Tom’s Cabin as “nonsense” because African American slaves, “being valuable property” were “well treated and adequately fed, housed etc.–but not more than just adequately.” So in one sentence from one trip, he apparently helps gives in to the erasure of the long legacy of horrendous violence against people of color in the United States, and Blacks in particular.

Amiran combines these racist statements with classist ones, both for American Blacks and for poor white sharecroppers or as he calls them: “the ‘Poor White Trash’ type, the most backwards imaginable.” He disparages them for sitting on their porches all day and working “only when they do not feel like not-working,” an attitude that one of Amrian’s guides, here explicitly noted, attributes to the sharecropper’s “backwardness” and later, possibly in Amiran’s own words, the effects of malaria and a bad diet “through generations”. Of course, from a sharecropper’s perspective, it might seem that “not-working” was the most rational option for sharecroppers who carried out backbreaking, thankless work, to possibly only end up more indebted and malnourished at the end of the day, not to mention the difficulty of finding work at all. Later Amiran draws a diagram of a trailer in a trailer park, which at that time may have seemed like a hi-tech and modern housing arrangement.

What’s revealing about Amiran’s travel diary  is that the racist Jim Crow laws and related extreme forms of segregation don’t appear anywhere in it. The well documented and oppressive legal and geographical system of racial discrimination is absent from his experience although, presumably, he was eating in “Whites Only” restaurants, drunking from “Whites Only” water fountains, and going to the bathroom in “Whites Only” toilets. This is particularly notable given that Amiran was an adult during the period of the Holocaust, which he spent outside of Germany. In addition, he was traveling through the South at a time when Jews in the US were struggling to be categorized as racially White. So it wouldn’t be unusual to expect some sensitivity from Amiran–who doubtless dealt with severe forms of anti-Semitism during his life–for the African Americans who were the explicit targets of both Atlantic slavery and de facto legalized Jim Crow segregation, whose injustices are felt in the US up to the present day. Instead, during the trip Amiran appears to have been granted access to whiteness–conditioned no doubt by his German upbringing, Lithuanian background and status as a professor. And the wages of that whiteness were ignorance.

As such, while his travel diary also sheds light on the ongoing Israeli oppression of Palestinians, Amiran’s trip also reveals something about the culture of dominant international academia, and of tourism more broadly. The general idea is that travel will broaden your horizons, and that certainly is a possibility, but there’s also always the danger that it will only reinforce our pre-existing ideas and dominant narratives of a particular place or region–as Mary Louise Pratt explores for colonial travel narratives in her book, Imperial Eyes.

So traveling differently is incredibly important, as is a willingness to be open and reflexive, and to do the work of seeing more than simply the most obvious destinations–or of seeing those obvious destinations in a new light. But this is also incredibly difficult to do. Indeed studies of the politics of alternative tourism, ecotourism, and international volunteering are, and deserve to be, a field in their own right. And activists and scholars of social justice have been arguing for years: innovating in methods of listening and learning are every bit as difficult, and every bit as crucial to theory, as the most abstract analytical and technical research. Amiran’s trip to the Jim Crow South cannot be divorced from the broader role he played, through both the military and academia, in the violent exclusion of Palestinians as part of the establishment and entrenchment of the state of Israel. Nonetheless, it shows how a moment for an opening–a trip to the most famously segregated and racially charged region in the world–might have been a chance to rethink such an approach to statehood, and indeed to life. Instead, for Amiran at least, the trip just represented oppression as usual.

*My thanks go to Rogier van Reekum for bringing the book to my attention and suggesting I write a post about Amiran’s travels.